For my English-speaking followers 😀

Thanks for stopping by 😉 I’m happy to announce the re-release of Fantasy For Sale by Sage Marlowe, one of my favorite authors! ❤ 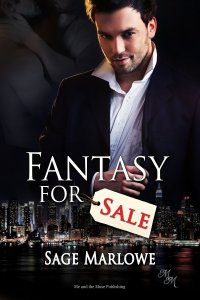 If you don’t know him yet, please check his website by clicking on his logo on the sidebar. Get the chance to know him better and read his awesome books. If we’re friends, you probably know that, first, I’m a huge fan of his writing, and secondly, that I have translated Sub-mission in French for him. If not, then now you know! 😉 Hey, isn’t this cover gorgeous?! I love the look on his face and the wicked smile….*purrs*

Here is the blurb of Fantasy for Sale

What’s the price of reality when a fantasy is for sale?

Cam is young, sinfully sexy and willing to play without limits, a combination which makes him a fantasy turned to flesh for men and women alike—and he’s for sale.

Nate is curious when it comes to carnal delights but hasn’t found the right man to explore his desires with.

When a friend buys Nate a few hours of pleasure with Cam, it’s not much of a surprise that Nate ends up intrigued. He keeps coming back for more and the attraction between them appears to be mutual but while Nate finds himself falling for the sexy hooker, Cam makes no secret of the fact that for him, sex is just a job.

Determined to win him over, Nathan tries to show him that sex is about more than physical satisfaction but Cam’s walls seem impenetrable until a dramatic event forces him to reveal some of his secrets and Nate begins to understand that Cam pays more than just the price for the reality behind the fantasy.

And as you’re very lucky guys, you’ve got to have a glimpse of the story with an excerpt  ♥

« Good morning, sweetie-pie! » Cynthia stood in the doorway with a beaming smile, glowing cheeks and the hint of a stubble rash on her chin.

I clutched my coffee mug. « Seems someone got lucky last night, » I grumbled and took a sip. It tasted burnt.

« You wouldn’t believe! » She grinned and approached me, obviously intent on hugging me, so I leaned away from her. I frowned and pointedly sniffed the air around her.

« I really hope you’re not going to touch me before you’ve had a very thorough shower and got rid of that eau de fuck you’ve still got on you. »

Cynthia shot me a wink and flashed a quick smile. « Oh come on, don’t be such a prude. No need to be Mr Grumpy-Pants just because you spent last night alone. »

« I’m not grumpy, » I told her grumpily. « I just don’t fancy having your fingers on me after they were sod-knows-where last night. » I drained my mug and added, « And I’m not prudish. »

« Oooh. » Cynthia rolled her eyes, mocking me openly now. « I can assure you, my fingers were only in the best places. All places on the most gorgeous male body this house has ever seen, to be precise. » Still grinning, she raised her hands and waggled her fingers. I stared at her and raised my eyebrows in fake annoyance.

She laughed. « Don’t give me that look, Nate. You know I’m just saying that because you’re beyond competition, darling. But seriously, you should see the guy. Yum-my. Believe me. Perfectly edible. And that’s just his body. »

« Lovely. Sounds like he really got under your skin. »

Cynthia poured a cup of coffee for herself and casually leaned her bony hip against the kitchen counter. « Well, I guess he did. Quite literally. » She batted her eyelids and peeked into her cup. A naughty smile curved her lips. « Several times, in fact. »

Sighing, I combed my hair back with my fingers. It had been such a pure, quiet morning—so far. « Go on then, tell me. » I got a refill then cocked my head, ready to listen to what was doubtlessly going to be a lengthy and detailed description of last night. Cynthia could be shockingly open when it came to sharing her sex life with me, something I liked to think I’d long since got used to.

And still I squirmed when she said, « Four times. He knows how to handle that beautiful body of his. »

Trying to hide my envy, I glared at her. « He made you come four times in one night? And you’ve only just met this guy? »

Cynthia shook her head, chuckling. « No. He came four times. I lost count after the seventh. »

I just barely managed to stop myself from spluttering into my coffee—or maybe spitting it across the room. « Seems he really knows what he’s doing. »

« Yeah, but then again, you’d expect him to, wouldn’t you? » Cynthia took a sip from her cup and met my eyes in wordless challenge.

« You bonked the hooker? Shit, Cyn, I thought you’d only booked the guy to go to that opening with you. »

She giggled and I was fairly certain I detected a slightly hysterical note in it. Uh-oh, woman on hormonal overload. I raised my eyebrows and Cynthia had the decency to look at least a little sheepish, probably remembering my response to her idea of hiring an escort as her companion for the occasion.

« Well, that was the plan. » She sighed and, cradling the mug in her hand, ran her fingertip along its rim as she continued talking. « But when he turned up, he was just so…charming. He got it all right, you know. He was polite. He knew exactly how to behave and he was so attentive. Made sure I always got a fresh drink before I even realised I’d finished, talked to people without trying to steal my fire, that sort of thing. Seriously, he was just a perfect gentleman. »

« Until he tried to get into your knickers, » I said, letting sarcasm bleed into my voice. It wasn’t like Cyn at all to let herself be lulled into fascination by a smooth talker—a professional, at that.

She nodded, not quite meeting my eyes.

Cynthia was a gorgeous, bright and successful woman who could take her pick among the men queuing up. She was the kind of girl that every man would be proud to be taken home by. She definitely didn’t need to spend money to get laid—or have someone fetch her a drink.

She shrugged. « That’s the way it works in his line of business. »

« Yes, sure. Aw, don’t look at me like that, Nate. There’s nothing wrong with it. Honestly, it made me feel downright good to know that he considered it a job. » She tilted her head to the side and looked at me thoughtfully. « You know what it’s like to take someone home on the first night, Nate, don’t you? Especially when it’s supposed to be only that one night. It always makes me feel so self-conscious and on edge. I have to make sure not to tell him too much or say anything that would make him get the wrong impression, that kind of thing. If I make it too easy for him, he’ll think I’m a slut, if I’m too eager, he’s scared I’ll want to tie him down. » She bit her lip and let out a sad little chuckle.

« And it’s bloody difficult to change your mind when you’re a woman, too. I’m not saying I do that a lot, but sometimes I just realise the guy and I don’t…fit the way I thought we would. Most guys are not too happy with that, so if it happens, I have to be really careful not to piss him off and make him think he could get it if only he tried a bit harder. Besides, an awful lot of guys think a one night stand is just so they get what they want and they expect a girl to deliver and not all of them take the time to return the favour, you know. »

She rolled her eyes. « Last night, I didn’t have to worry about any of that. He was so easy about everything and focused on doing what I liked. I knew he’d do what I’d ask him to do. And boy, he did. » This time I did the eye rolling thing.

« It made me feel safe with him, you know? » she continued. « Knowing he’d make it good for me without any strings attached. He wouldn’t even have stayed the night if I hadn’t asked him to. »

I tried to understand. I really did. I could get the trouble with the dating part, but— »Doesn’t it bother you that he did what he did only because you paid him for it? »

Cynthia gave a shrug. « No. That’s the point. I could enjoy all his attentions without having to return any of it and didn’t have to feel bad about that. »

For another excerpt and if you want to learn how Nate meet Cam, then you’ll have to go on Mikky’s World of Books! 😉

You can find the book on Amazon and on All Romance Ebooks. Sorry guys, I’ve got to go buy it! Have fun ❤ *clicks furiously on the link* 😀 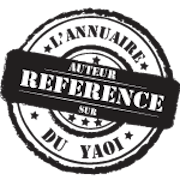 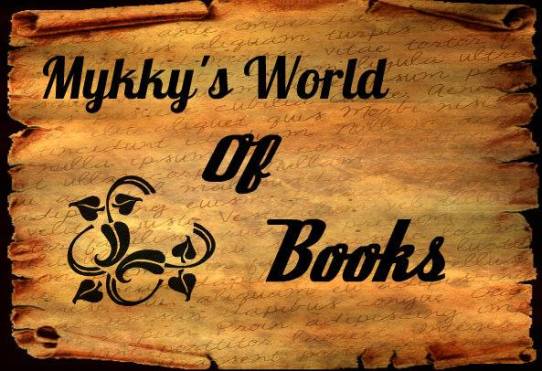